Our showroom is now closed, however you are still able to talk to us on 0116 2541053. As our stock is located at different warehouse locations, it is important that you contact us before placing an order. Thank you for your assistance during these difficult times. 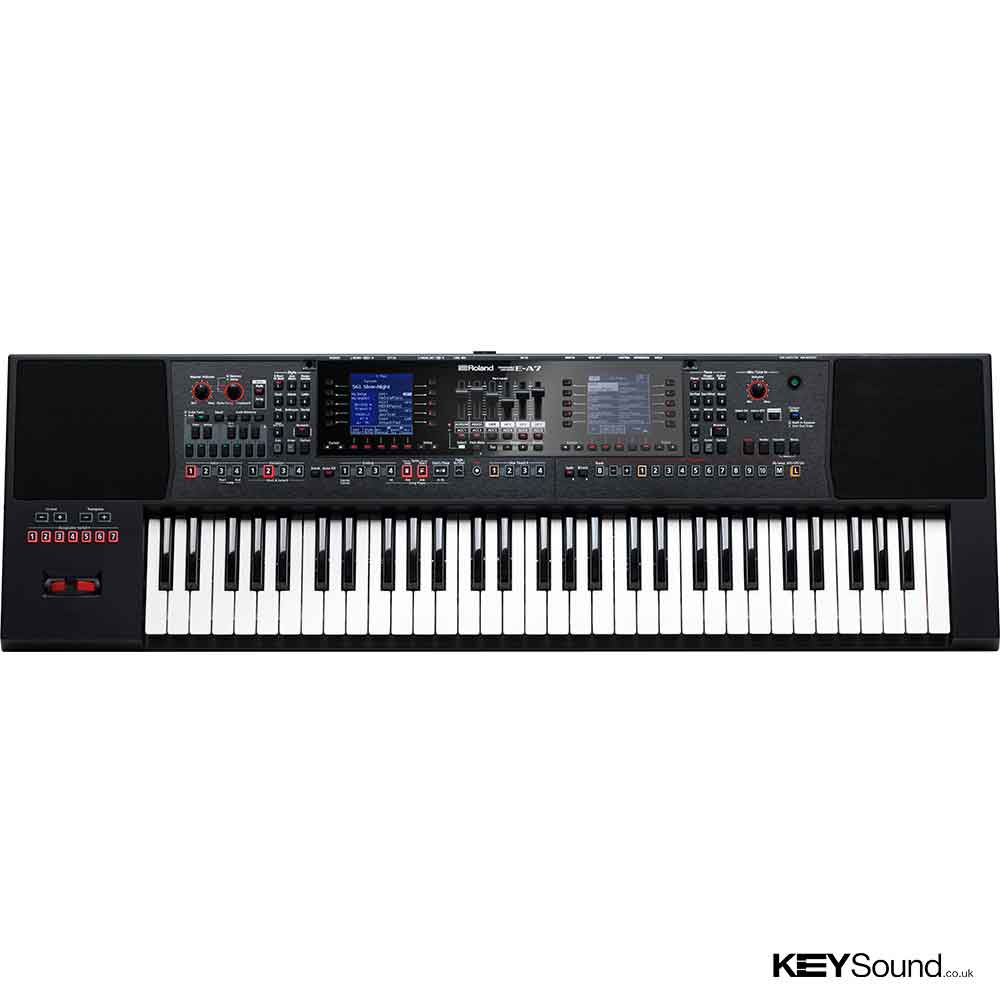 Select Your Bench and Accessories
Price £1099.00
The E-A7 offers over 1,500 essential sounds including piano, electric piano, organ, string, brass and many more. There are instruments from all over the world too, including authentic sounds from the vibrant musical cultures of the Middle East, Indonesia, India, Vietnam, and Eastern Europe.
New Firmware Announced v2.01 Call 0116 2541053 to Find Out More

A WORLD OF SOUNDS AND BACKING STYLES AT YOUR FINGERTIPS

The E-A7 is a versatile arranger keyboard for musicians needing professional sounds and authentic backing styles from all over the world. Using the E-A7 is fast and intuitive thanks to its logical dual-screen layout; styles on the left, and sounds (over 1,500 of them) on the right, with most options having dedicated, quick-access buttons. You can import WAV files to create your own instruments or even sample directly from the keyboard. Singers will appreciate the microphone input with dedicated vocal effects while the whole keyboard is easy to gig with, weighing in at just 8kg. Wherever you’re going with your music, the E-A7 will help you get there.

EXTENSIVE BACKING STYLES INCLUDING AUTHENTIC ARRANGEMENTS FROM ALL OVER THE WORLD

While the E-A7 excels at Western music, it’s equally strong for music from other parts of the world too, with a generous array of global backing styles crafted by skilled musicians from Asia, the Middle East, Europe and South America. It doesn’t matter where in the world you play it – the E-A7 will fit right in.

AN ENTIRE WORLD OF SOUND, AT YOUR FINGERTIPS

The E-A7 offers over 1,500 essential sounds including piano, electric piano, organ, string, brass and many more. There are instruments from all over the world too, including authentic sounds from the vibrant musical cultures of the Middle East, Indonesia, India, Vietnam, and Eastern Europe. Every sound has been developed in collaboration with accomplished musicians, each one an expert in their local music scene, for the utmost realism and quality. And since the sounds are categorized by region, you can find the perfect sound for your music quickly and easily.

EXPAND THE ONBOARD SOUNDS WITH WAV SAMPLE IMPORT

The 1,500 built-in tones of the E-A7 are just the beginning. Most gigging musicians have collected a library of tried-and-tested samples over the years – and you can use them in the E-A7 thanks to the WAV import option. But you can also use the onboard sampling function to create custom sounds too, including drum beats or even backing vocals. Everything you need to polish the sound, including applying effects, is already on board so you can arrive at the gig, try out ideas at the sound check, and perfect your sound before the show starts.

FAST, LOGICAL LAYOUT WITH BACKING STYLES ON THE LEFT, TONES ON THE RIGHT

Some arranger keyboards include a lot of functions, but this can make them complicated and difficult to use – not ideal when you’re in front of a crowd of people expecting a great night out. The E-A7 is logically laid out, showing backing styles on the left and sounds on the right, and each side has its own LCD screen showing the essential information. And with 156 buttons for fast access to the functions you use most, you’ll spend more time playing and less time panicking about finding the right button.

ALL THE ESSENTIALS FOR A SMOOTH GIG, AT YOUR FINGERTIPS

When you’re at a gig, you just need things to work, so the E-A7 gives direct access to the most common functions needed when you play. Six phrase pads trigger one-shot audio samples or MIDI phrases just where you need them. You can define and switch to alternate musical scales at the touch of a button. There are also six sliders that can adjust the volume of the various parts, such as drums, bass and the accompaniment. Finally, there are seven user-assignable buttons above the pitch bend lever for your own custom requirements, so whatever you need to do, you can do it right away without lifting your hands off the lever.

PLUG IN THE MIC, SET THE LEVEL, AND SING

If vocals are an important part of your repertoire, the E-A7 has a microphone input along with dedicated volume controls on the front panel; just turn the knob to instantly adjust the vocal level, with no menus in sight. You also get an array of pro-grade vocal effects to add polish to your performance, with a versatile selection of editable reverbs and delays on board.

Although it’s great to bring everything you need to the gig, carrying a heavy keyboard is, quite literally, a pain. The E-A7 makes life easy for gigging musicians in two ways – it’s got everything necessary for a great performance so there are no extra boxes and wires to drag you down, and yet it’s also easy to transport to and from the show. Packing a lot of power into a compact 61-key format weighing just 8kg, the only pain you’ll get from the E-A7 is having to do yet another encore. Which is a good problem to have.

The E-A7’s onboard song player reads Standard MIDI Files (SMF) as well as WAV or MP3 audio files. Comprehensive playback options allow you to repeat a section of the song or jump to a different section, and if you’re using WAV files you can minimize the presence of any vocals using the Centre Cancel feature, leaving space for your own voice. You can even record your entire performance as a WAV file and save to USB memory – a great way to promote your music and get more bookings.

Since the E-A7 has plenty of buttons and sliders, most of the ‘must-haves’ are already at your fingertips. You can also store a variety of settings within a single program, including the on/off status of essentials like Part, Auto Fill and Input EFX. This extra layer of control means you can easily customize the keyboard’s setup for each song during the gig. Programs from Roland’s BK arranger series can also be accessed directly from a USB memory stick.