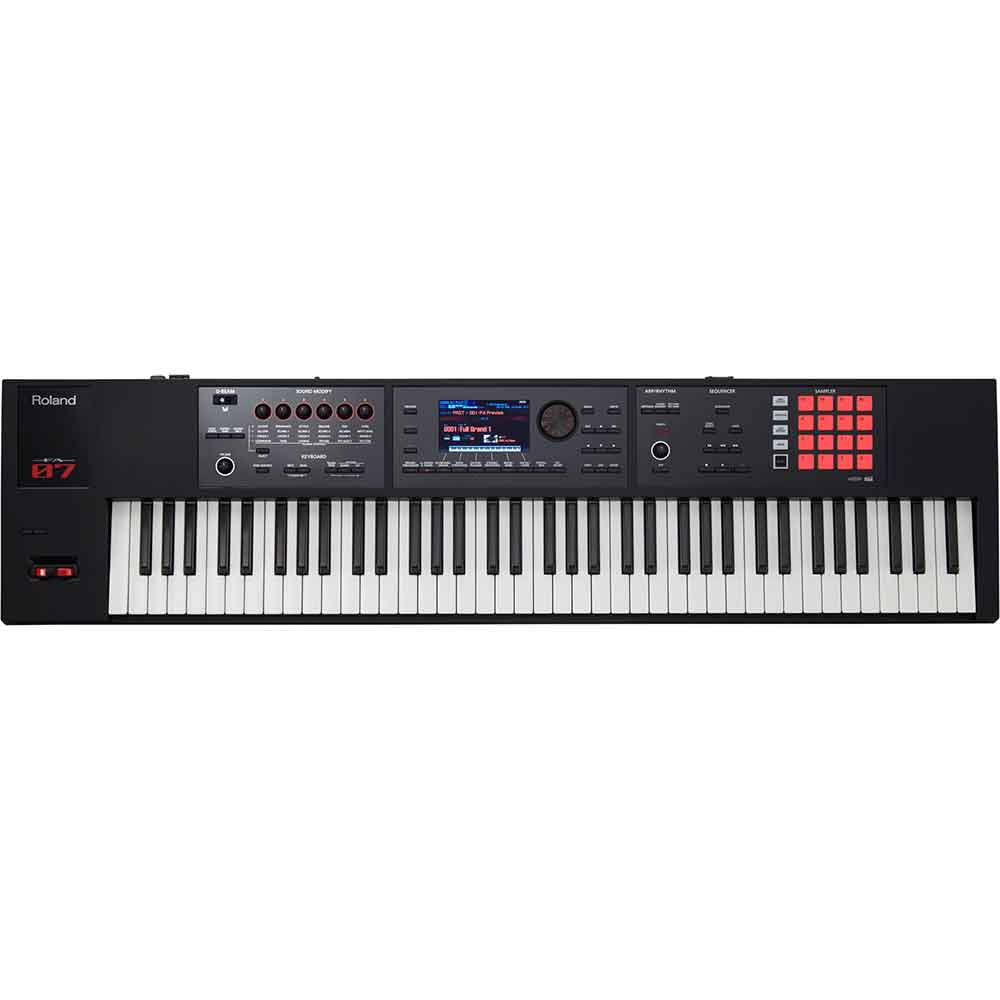 The onboard sounds are key to the success of any workstation, and here, the FA-07 has some of the very best anywhere. Over 2,000 sounds are featured in total, derived from those in the Integra-7 uber-module. It also incorporates Roland’s cutting edge, SuperNATURAL technology. This delivers more expressive and authentic sounds, by removing the typical audio artefacts of sample-based synthesis (such as obvious sample switching or looping), or adding correct audio details (such as sympathetic resonance on piano sounds, for example), and much more.

A selection of SuperNATURAL acoustic, drum and synth sounds are included, and sounds can also be expanded via internal wave expansion slots, plus the FA-07 is compatible with Integra-7 sounds. This means that lots more can be accessed online via Roland’s excellent Axial sound library.

16-Track Onboard MIDI Seqencer
Sometimes, when inspiration hits, the computer isn’t switched on or even nearby. This is where the workstation often proves its worth. The Roland FA-07 is equipped with a 16-track sequencer, but has some very clever, and very useful tricks up its sleeve…

A non-stop loop recorder enables ideas to be caught easily, and songs to be constructed quickly and intuitively. In addition, via the SDHC slot, work can be exported to a finished stereo audio file, or to multi-track audio data for use in a DAW of your choice.

Like its predecessors, the FA-07 has a built-in sampler, but here it is based on the SP-404sx. This has sixteen sample pads, with four different banks, and direct recording to SDHC. This adds further to the unit’s power as a standalone instrument and performance tool.

A USB socket to the rear provides the means for the unique to connect seamlessly with a DAW set-up, however. This operates as a MIDI connection, but also an audio interface, too. A guitar and microphone input are equipped, which can be used to input audio to the sampler, or to the DAW via the audio interface.

The FA-07 is fitted with a plethora of controllers. To the left, six rotary controllers provide the means to tweak sounds in real-time, or change effects settings, EQ and Pan. The whole workstation can be configured for use with a DAW at the touch of a button.

An astonishing, 16 effects engines (one for each part) feature, along with dedicated drum processors, EQ, chorus and reverb. If this were not enough, the whole thing weighs just 5.7kg, making it a gigging musician’s dream.

There are very different demands placed on a workstation for the live performer and the studio producer. The Roland FA-07 provides ample tools for both parties, but does so with some of the very best sounds and control available
Show More

* The wave expansion slots are rewritable internal waveform memory. You can download data from the Axial sound library site and write it via a USB flash drive into the FA's internal wave memory (slot).

* Sampler trigger data can be recorded.

* Samples cannot be used as wave data for the sound engine.

Show More
There are currently no reviews for this product. Please have a look at our service reviews

Feedback for Keysound has been compiled from 942 customer reviews