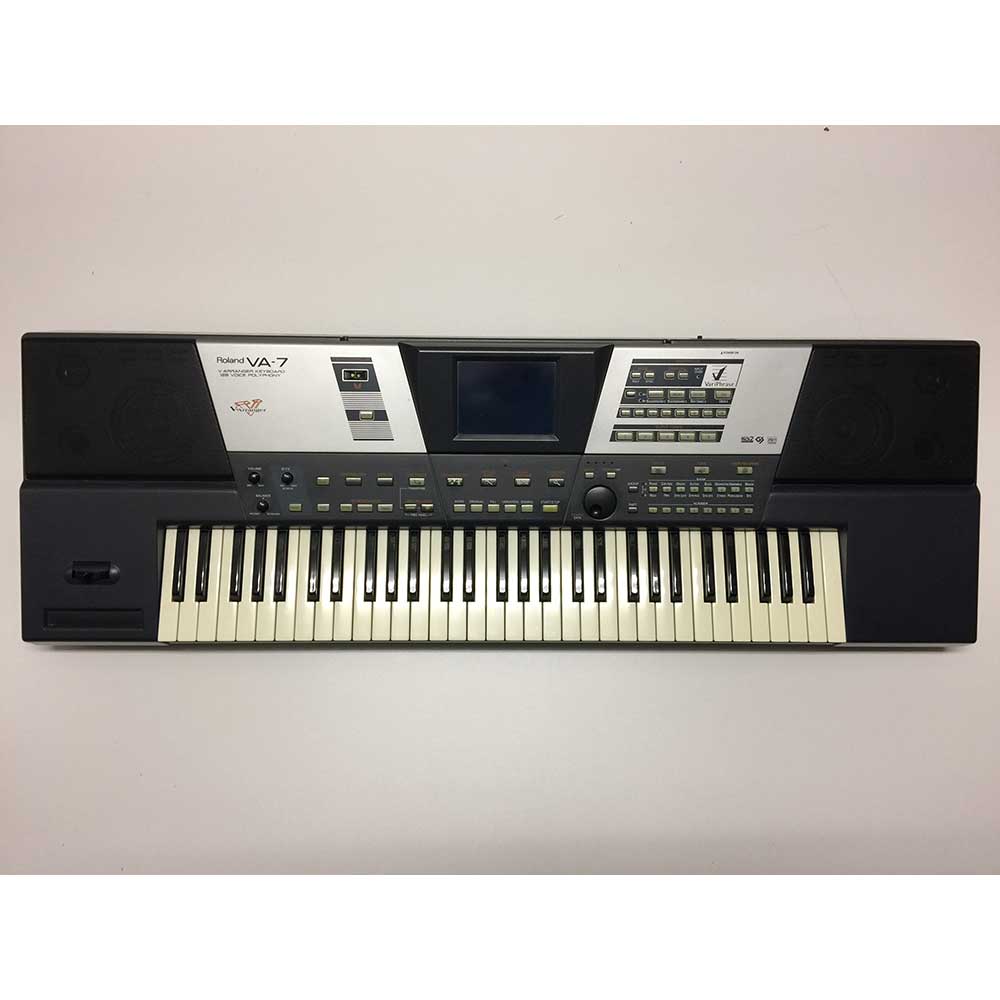 With the VA-7 V-Arranger, Roland brings an entirely new level of performance to music enthusiasts everywhere. These advanced arranger keyboards combine a powerful 128-voice GM2/GS compatible sound engine with exciting functions-including Roland's exclusive VariPhrase technology on the VA-7 for re-arranging vocal samples-plus a touch-screen interface that makes creating music sequences and arrangements ultra-intuitive.
Keyboard in fair condition, the keys and buttons have a yellow colour, however this does not affect the working of this keyboard, comes complete with owners manual, music rest and mains lead
- COLLECTION FROM STORE ONLY -

Far from "upgraded" models, the VA-7 V-Arranger keyboards is an arranger utilizing a 128-voice sound source with extensive layering and velocity switching. In all, there are 3,649 GM2/GS compatible tones, including stereo-sampled drum kits recorded in world-class studios to capture their natural ambience.
A high-definition arranger section sports 128 new music styles-including 16 acoustic styles-which were created using live musicians. These styles take full advantage of the VA-Series' ultra-expressive sound engine to offer a trully "live" feel impossible to at tain using sequencers.
With the VA-7, you can access up to 64 additional styles via Zip or floppy disk. Styles can be varied using the onboard Style Orchestrator and Style Morphing features.

Powerful, Yet Easy to Use

The V-Arrangers are easy to navigate, thanks to a dual-mode interface with touchscreen LCD. The most common features are accessible via touchscreen commands, while more advanced functions are neatly organized within sub-menus. A "Virtual Band" function automatically configures the keyboard using a helpful setup wizard.

The flagship VA-7 incorporates Roland's VariPhrase Technology, allowing you to add realistic vocal arrangements using Preset or User samples that can follow the onboard styles-even when improving or making sudden chord changes. Simply call up any of the VA-7's 48 sampled vocal phrases, and play them back with 4-voice polyphony in any manner desires.
Amagingly, a single vocal sample can be played back at any pitch on the keyboard -even adding harmonies- without "chipmunk" effects and without changing the speed at which the vocal was performed. you can change a vocal's phrasing and melody in real time, or make it match the tempo and chord changes of a style as it plays- all without unnatural artifacts.
The VA-7 allows up to 16 vocal samples to be recorded and stored in the 8MB internal memory; samples can also be backed up to the internal Zip100 drive.

A 2-Track Live Recorder can be used to quickly record and edit a performance or SMF file. Or, use the professionable-level 16-track sequencer to record complete arrangements consisting of separate drum, bass, and keyboard parts. You can ever create and change styles imported from an SMF disk via a separate 8-track User Style Composer.

Up to 128 User Programs can be stored for instant retrieval of custom front panel and MIDI configurations. A One Touch programmable function stores up to four preferred Tones with each style, while five Super Sound buttons can be used to recall your favorite sounds, such as "Jazz Scat".
Realtime controllers include a pitch bender/modulation lever, touch controller and aftertouch, Balance knob, and D Beam controller. Using the D Beam, you can send MIDI control information such as pitch bend and modulation, or play notes by moving your hand over an invisible beam of light. A powerful Bass-Reflex speaker system rounds out the impressive feature list.

Feedback for Keysound has been compiled from 925 customer reviews