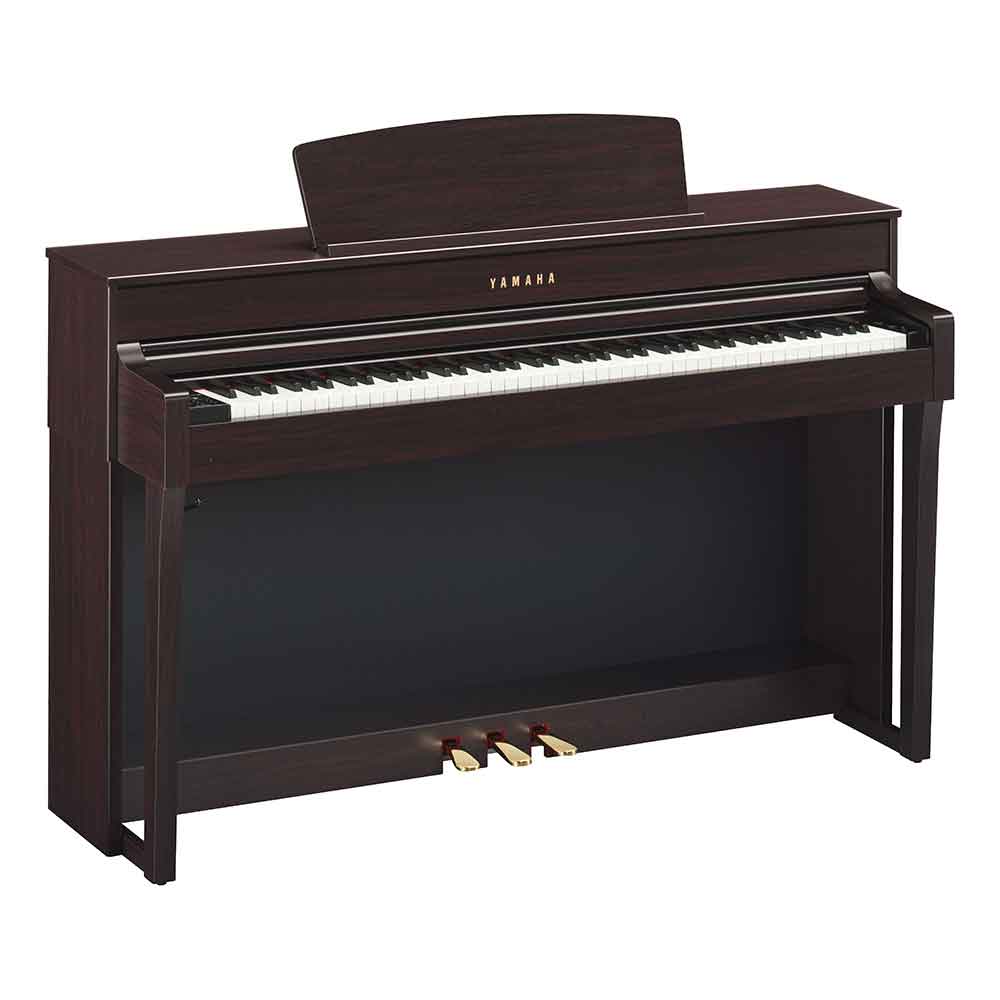 Select Your Bench and Accessories
Price £1899.00
Click to Checkout With Finance

The new CLP-600 Series captures the soul of a remarkable concert instrument in a digital piano to deliver a grand piano performance in a more personal environment. Play with the voice of the CFX, the finest Yamaha concert grand piano. The Clavinova CLP Series also offers the unique sound of a Bösendorfer Imperial.

Powerful sound and a superb wooden keyboard offer unprecedented levels of versatility to pianists of all abilities.

With two world-renowned concert grand pianos available at the touch of a button, the CLP Series lets you choose the perfect piano tone for the music you want to play. Offering far more than just sampled sounds, the CLP-600 Series reproduces the Yamaha CFX concert grand and the legendary Bӧsendorfer Imperial in meticulous detail.

The powerful tone of the acclaimed CFX

Yamaha’s flagship 9’ concert grand piano, the CFX, offers sparkling highs and a powerful resonant bass with a sound that projects to the furthest reaches of any concert hall. The CFX was played by the winner of the prestigious International Chopin Competition in 2010, and has since gained recognition as one of the greatest concert grands of modern times.

The legendary sound of a Bösendorfer Imperial

Originally founded in 1828, Bösendorfer holds a unique position amongst piano makers as the only manufacturer in the world still utilizing the Viennese tradition of hand-crafted design that produces the uniquely warm bass, singing treble and rich tonal colors known as the “Viennese Sound”. The development of Bösendorfer pianos has been influenced by such famed composers as Brahms and Johann Strauss, resulting in an instrument lauded as the only piano capable of withstanding the frenetic playing of Franz Liszt.

Remaining true to this legacy of meticulous design and implementation, each Bösendorfer instrument is painstakingly crafted over many hours at the hands of highly-experienced craftsmen. In 2008, Bösendorfer became part of the Yamaha Group and in 2014, the revered tone of the Bösendorfer Imperial was featured in the Clavinova CLP Series.

Clavinova is an innovative lineup of digital pianos that have continued to evolve while seeking to provide the touch and tone of a concert grand piano—the ultimate symbol of piano excellence. This authentic grand piano experience is the product of the knowledge and expertise that Yamaha has accumulated over more than 125 years of crafting acoustic pianos. Utilizing state-of-the-art technology to achieve grand piano quality, Clavinova digital pianos offer an inviting playing experience that is perfect for players of all levels. They emulate the touch and tone of a grand piano to make the transition from digital to acoustic piano a seamless and enjoyable one.

In a grand piano, sound resonates throughout the body of the instrument, producing a rich reverberation that envelops the listener in sound. This phenomena is reproduced perfectly in the Clavinova through enhanced Virtual Resonance Modeling (VRM). The original VRM calculates the various states of the strings for each of the 88 notes on the keyboard, from one instant to the next, and timing and depth of damper pedals pressed. The enhanced VRM now also calculates aliquot resonance in the upper octaves, and the full resonance of the soundboard, rim, and frame. This technology allows for vivid, bright, richly-varied expression that reflects the limitless number of factors inherent in piano performance.

Sound in an acoustic piano attenuates over a long time. Pianists can change the volume of the sound—as well as its dynamics—to achieve both mellow and bright tones by simply changing the pressure they apply to the keys.

The Clavinova features long, carefully-sampled recordings of notes on a piano, reproduces them in rich detail and utilizes unique Yamaha technologies to achieve smooth tonal transitions in response to the touch of the player.

Additionally, the Clavinova has been repeatedly tested and adjusted by numerous pianists in order to attain a performance feel similar to that of a grand piano.

The moment a pianist’s fingers are lifted from the keys of a grand piano, subtle changes occur in the instrument’s tone as the damper is lowered onto the strings to mute its sound. Key-Off samples features actual recordings of these changes, offering a faithful reproduction of the most subtle changes in the piano’s sound, allowing for a more realistic performance.

Natural Wood X (NWX) keyboards are created using unrivaled expertise that Yamaha has acquired through more than a century of crafting fine pianos.

Just as with grand pianos, the material used for Natural Wood X keyboards is cut from wood that has been carefully dried specifically for use in making musical instruments. Only the best wood from the finest part of each tree is selected, resulting in a keyboard that is more resistant to buckling and warping than common laminated wood keyboards.

The Yamaha Natural Wood X keyboard features the same action and three-sensor configuration as Graded Hammer 3X keyboards, which accurately senses and interprets the behavior of the keyboard for a response that feels very similar to that of a grand piano. This allows you to vividly perform smooth, flowing passages or light trills, techniques used in many pieces such as Für Elise.

The escapement mechanism in a grand piano moves the hammers away from the strings quickly after they strike them, in order to prevent any interference with string vibration. This mechanism produces a slight clicking sensation when the keys are pressed gently. Since Real Grand Expression offers players superb sound, touch and pedaling, we decided to create an escapement that delivers outstanding playability, repetition, and response without impeding performance. The Clavinova keyboards feature an escapement mechanism that reproduces this sensation near the bottom of the key dip. They have been designed in such a way that the click is discernible only on the lightest keystrokes, similar to the keyboard of a grand piano. These keyboards have been adjusted to provide additional friction that balances key repetition and response without impeding performance.

Our fingers are more sensitive than we think, and for pianists, the texture of the piano keys is extremely important. The GH3X keyboard features white keys made from the highest quality synthetic ivory, developed independently by Yamaha. The black keys are finished in synthetic ebony. Synthetic ivory keytops reproduce the tactile surface of the real ivory keyboards once used in older acoustic pianos. It features highly absorbent material that prevents fingers from slipping even after hours of practice, while retaining the ideal texture and feel. Resulting from well over a century of experience in making acoustic pianos, this exclusive Yamaha technology achieves a finish that feels natural and comfortable. In addition to the feel, the appearance and fine texture of these keys is unmatched by any other digital piano, and is sure to inspire pianists from the moment they experience it.

Keyboards fulfill the vital role of transforming emotion from your fingertips into sound and therefore, must be smooth to play in order to maintain superb touch for prolonged performances. That is why Yamaha has fitted Keyboard Stabilizers to all 88 keys, offering players a natural touch and improving the stability and durability of the keyboard.

The mechanics of superior sound

Similar to an acoustic piano, the Clavinova is calibrated carefully, with speaker positioning and body materials checked to ensure that the entire instrument resonates optimally. For a sound image that is very close to the grand piano, these instruments feature Tone Escapement in several locations throughout the body that allow the sound from the speakers to be projected to the listener’s ears without being trapped inside the instrument. The higher-end models in the CLP-600 Series feature dedicated DSPs, amplifiers and speakers. This vastly improves sound production, ensuring that the volume and quality of sound heard by the performer is flawless, with the output from each speaker arriving at the performer’s ears in perfect synchrony.

Acoustic Optimizer
The speakers attached to the body exhibit a phenomenon in which, if nothing is done, the volume of the sound will increase due to the resonant frequency of the body. Conversely, installing pipes with the same resonant frequency within the body suppresses this resonance. Acoustic optimizers utilize this phenomenon.

This improvement of the sound is something that has only been possible thanks to Yamaha‘s thorough knowledge of the internal acoustic characteristics of musical instruments.

Concert hall performance in the comfort of your own home

Yamaha’s advanced binaural sampling technology is now available on the Clavinova for the first time. The technology uses samples from the CFX, Yamaha’s acclaimed concert grand piano, recorded with specialized microphones that capture locational information and other nuances discerned by the human ear. The resulting sound is so natural, so enveloping, that you’ll soon forget you’re even wearing headphones at all.

Once you choose the Yamaha CFX Grand Voice and put headphones on, the binaural sampled sound is automatically ready and no additional settings are required. Now with or without headphones, you can fully enjoy the concert grand experience at home.

You can play music through the audio system on the Clavinova by using a Bluetooth-enabled smart device. You can stream audio data such as mp3 files. You can enjoy playing along with any songs on your smart device, and you can even share your Clavinova performances.

The recording function featured in Clavinova digital pianos allows you to record your performances* with a single touch, which is useful when you want to review your playing objectively. Additionally, you can record up to 16 tracks for simultaneous playback, so different hands can be recorded separately or overdub parts with different Voices.

* Recordings are made in MIDI format, and can also be recorded to USB flash memory. Compatible software is required for playback of recorded data on a computer

Record performances to USB flash memory and create audio files* you can save and play back on a computer, share with friends or create a CD.

* Data is saved in WAV format

Connect the Clavinova to a computer or a USB memory device to manage your library.

Key-Features and differences between models

Points in red text indicate the features that are improved or added compared to the next model down in the range.
All Clavinova CLP models comes with a book of music scores.
For wired or wireless connection, refer to the "iPhone / iPad Connection Manual" (http://download.yamaha.com/)

Show More
Show More
There are currently no reviews for this product. Please have a look at our service reviews

Feedback for Keysound has been compiled from 821 customer reviews